From the very beginning, the GDR’s border fortifications on the outskirts of West Berlin had a great
influence on the flora and fauna.

Due to its large forests, West Berlin, which was enclosed by the wall
forests, West Berlin had far more wildlife than one would expect in a metropolis of over two million people.
million inhabitants.
It was not until the 1980s that environmentalists recognised the immense ecological value of the
of the border strip. And it was only shortly before the fall of the Wall that the well-known nature filmmaker Heinz
Sielmann made this fact known to a wider public with his TV documentary “Tiere
in the Shadow of the Border”.

Prior to that, the border installations had almost always received negative media coverage in relation to animals.
negative, e.g. whenever members of the border troops shot stray dogs.
shot. The outcry in the West Berlin print media in these cases was scarcely
than in the cases of people who had been killed.
But dogs were not only targets of the border guards, they were also collaborators.
In addition to the 2,300 or so two-legged members of the border troops who were on duty every day and guarded the Wall, dogs were also used as a weapon.
guarding the Wall every day, there were also over 1,000 dogs living in the border
lived in the border fortifications. Their area of responsibility lay directly next to the three-metre-high Hinterland wall to the GDR
and its various signalling installations. Apart from in densely populated areas, they were
leashed to walkways everywhere on the border strip. During their walks, the West Berliners could hear their
aggressive barking over great distances. In the course of the decades, an enormous number of
number of “chain dogs” served on the Berlin border. Unlike the border guards, there was no pension for them.
most of them were euthanised when they became too old to serve.
old for service.

The Berlin wildlife benefited from an enormous difference in the fortification of the
German-German border to the Federal Republic: there were no mines or self
self-propelled guns. Thus the death strip became a refuge for many smaller animal species.
Less conspicuous were the rare plants that, despite the use of poisons, found niches to survive in the border area.
to survive in the border area.
Hunting was also restricted. In the border area of the GDR, only comrades who were 100
comrades who were loyal to the system were allowed to hunt.
as was customary for West German hunters. For hunting
the hunters of the workers’ and peasants’ state in the border region had to
local police stations and return it after 72 hours at the latest.
after 72 hours at the latest.

The few West Berlin hunters (only Allied members of the Rod and
Gun club) and the West Berlin foresters sometimes made the astonishing
experience that wild boars sought shelter in the shadow of the Wall. Since the
the Wall was not the actual border, there was a strip of land that
hunters could not follow them. They were never allowed to shoot in the direction of the
in the direction of the wall. The not at all stupid pigs seem to have
have realised this.
The East Berlin and Brandenburg wild boars involuntarily contributed to the
the scarce foreign currency coffers. Many ended up in the kitchens of
gourmet restaurants in Western Europe. On paper, the hunters received
a 20 percent share, but 1 to 1 in GDR marks. And this
was credited to the hunting society, which was then allowed to organise
which was then allowed to organise communal evenings with the money.
Even if the wild boars and deer could not cross the actual border fortifications
the actual border fortifications, they found their own ways to swim long distances
long distances and thus bypassed the border fortifications.
Other animals took a more direct approach. Foxes undermined the barriers and
small animals could sometimes even pass directly through them. Some bird species
learned that they could breed particularly safely in the restricted area.
The border rabbits even became the secret symbol of the GDR opposition.
opposition. Pacifist animals that were able to cross the Wall at will, not not over-
but “under” it. The 1972 “Rabbit Flag Festival” by the
East Berlin artist Manfred Butzmann was an alternative children’s festival,
far removed from any SED youth work. It was conceived as a persiflage of the
GDR’s flag mania. To what extent the SED realised the allusions to the
the border rabbits was clear to the SED is impossible to say.
For tourists coming to West Berlin for the first time, the size of the forest and water areas was a surprise.
of the forest and water areas was a surprise. They came with the
of something like a small medieval town with a city wall.
city walls. And found themselves in a city with a zoo (West Berlin),
zoo (East Berlin) and many wild animals in numerous parks and forests.
forests. For the West Berliner
encounters with stone martens,
raccoons, foxes, rabbits, wild rabbits, wild boars and deer were completely normal and
they were particularly frequent in the border area.

Escaped West Berlin animals were a big problem. If, for example, a dog strayed into the
dog strayed into the area between the Wall and the actual border, its master or mistress was not allowed to
mistresses were not allowed to fetch it from there. Even the West Berlin police were not allowed to enter the area.
enter the area. Only the GDR border guards and the soldiers of the Western Allied garrisons
were able to rescue the animal. In the course of the progressive easing of tensions, the
border guards mostly reacted humanely in later years. They ignored it when the owners
animal and committed a “border violation”.
With the demolition of the Wall, the animals lost many of their hiding places in the border area. But
more and more of them come into the city, so many that wild boars have become a plague.
a plague. Especially on the outskirts of the city, many garden owners have now built their own
built their own border protection systems. 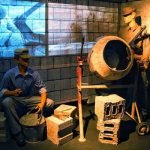 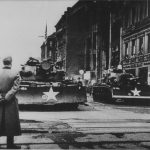 Berlin crisis 1958 – 1961blog
We use cookies to ensure that we give you the best experience on our website. If you continue to use this site we will assume that you are happy with it.Ok