On 15 June 1965, Hermann Döbler (42) and his companion Elke Märtens (21) are discovered by two border guards during a boat trip on the Teltow Canal, part of which belongs to the GDR. Döbler intends to turn around at a water stop and return to Wannsee, the starting point of the excursion. What he doesn’t know, however, is that the official border already runs a few hundred metres in front of said barrier. After a few warning shots from the border troops, Döbler and Märtens begin to wave desperately to prevent anything worse from happening, but this is interpreted by the soldiers as a provocation and leads to them shooting down the two boat occupants. Hermann Döbler succumbs to his wounds while still in the boat, while Elke Märtens survives, seriously injured by a grazing shot to the head. While Willy Brandt calls the crime a cold-blooded murder, GDR officials gloat over accusations against Döbler, who allegedly planned attacks on the Berlin Wall and is known as a West Berlin refugee helper. After German reunification, the Berlin public prosecutor’s office brought charges against the border guards, which ended in a 6-year prison sentence for the shooter. 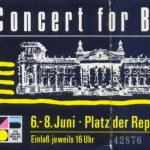