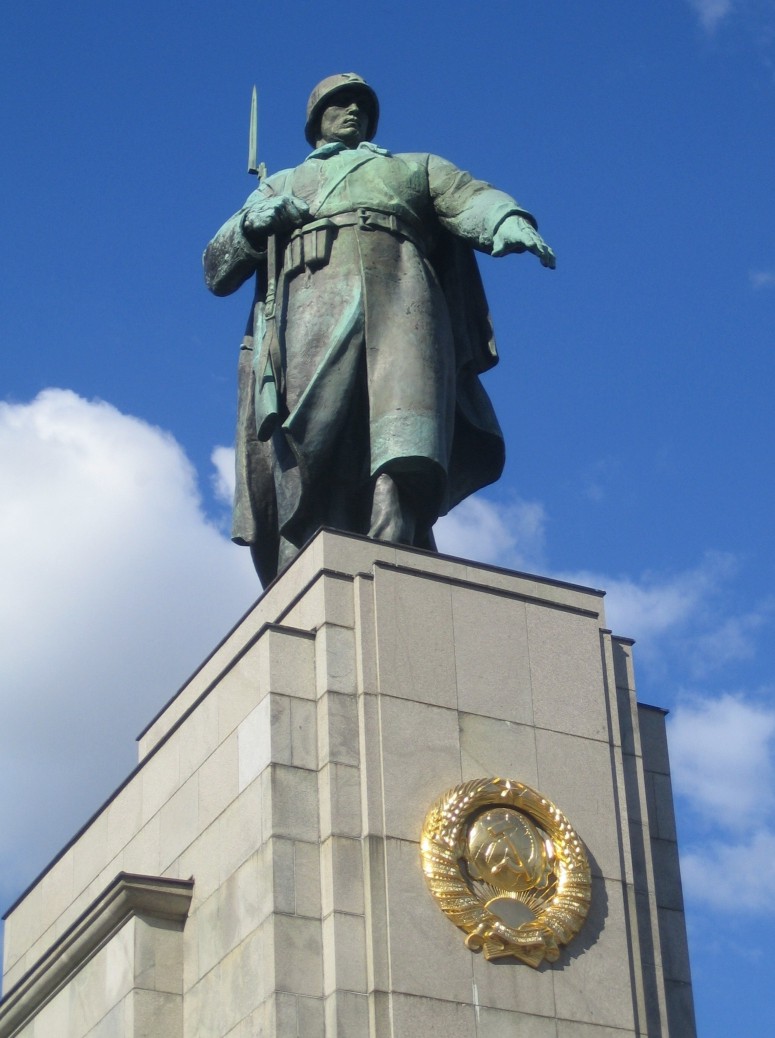 The bronze statue of the Soviet soldier in the Tiergarten by Lew Kerbel. The monument is intended to commemorate the fallen Red Army soldiers.

Russians have lived in Berlin since the 18th century. Their numbers increased enormously in the 20th century; the Russian Revolution brought thousands of White Russian refugees to the city.

The end of the war in 1945 brought enormous upheavals for Germany and the rest of the world. The division of Germany into a Soviet zone of influence and three Western Allied zones was more significant than one might have initially assumed. Historically, the occupation of a defeated enemy was nothing new. But only the Soviet Union had definite political plans for its zone of occupation. Stalin and the Soviet Communist Party had already taken in German communists before the war, and during the war exiles were prepared for the formation of a socialist government in Germany.

One of the long-term conditions for the Red Army to remain was to present the Russians as friends to the Germans. But this was extremely difficult. The excesses committed by members of the army in Germany permanently tarnished the image. In Berlin alone, the lowest estimates put the number of rape victims at 100,000; other authors cite up to 800,000.

In the Soviet zone, the subject was taboo; when Protestant church representatives called for the official suspension of the ban on abortion in § 218, this was rejected. It was impossible for members of the Red Army to be accused of such crimes. In the West, of course, this muzzling did not work.

The acts could not be denied. Instead, intensive propaganda began that the Red Army soldiers had come as friends and liberators. Stalin’s propaganda machine was quite successful, diminishing the achievements of the Western Allies and emphasizing Russia’s role in defeating Nazism. The term “friends” was soon used synonymously for Soviet citizens. However, the population often used the term with a critical undertone.

“To learn from the Soviet people is to learn to win” was a slogan spread on posters and on the radio. The Soviet Union was the most advanced country in the world. In October 1957, the apparent proof was delivered: with Sputnik, the Soviet Union took the lead in space exploration. And in April 1961, Yuri Gagarin became the first man in space. The West, especially the USA, suffered a shock. In the GDR, socialism was praised as the supposed basis for success. No one mentioned the German scientists who had been deported to Russia in 1945. The USA had collected prominent figures like von Braun, but the Red Army had collected the unknown doers who implemented the ideas.

The Cold War also took place in the sciences. In 1960, Werner Keller’s book: East minus West = Zero was published in the Federal Republic. In it, he described the Western European influence on art and science from the 15th century to the present. He names numerous foreigners who became Russians in Soviet history; Western influence existed long before Peter the Great. Possession of the book was punishable by imprisonment in East Berlin.

Unpleasant questions could be fended off with reference to German Nazi guilt. Reparations and deportations were explained as a consequence of the Nazi state.

Russia was also presented as a cultural role model. The dissemination of Soviet literature was ensured, and it was hoped that this would make it easier to win over the population.

Russian lessons were compulsory in schools and, together with the FDJ, the organization promoted pen-pal friendships between German and Soviet children and young people. Thousands of children were taken to holiday camps in the Soviet Union. Every May, the DSF organized a GDR-wide Week of German-Soviet Friendship.

If you take the pure membership figures, the DSF was a complete success. Membership continued to rise, from 3.5 million in 1970 to 6.4 million in 1988. But membership was not voluntary. If you did not want to risk any disadvantages in the GDR, you had to join an organization close to the SED. And the easiest solution was to join the DSF. A refusal to join the DSF was questioned by party and trade union officials as well as teachers and state leaders. The person concerned had to justify the refusal in writing.

It did not automatically lead to direct problems for the GDR citizen concerned, but anyone who wanted to make a career had to be a member of some organization. If a brigade of workers or farmers wanted to win an award in the socialist competition, membership of all in the DSF was a basic condition. Peer pressure was correspondingly high.

In practice, many members were only passive and never attended a DSF event. Membership was enough to prove “social activity” at a minimum level.

In West Berlin, the DSF was also officially active as the German-Soviet Friendship Society. It ran the Mayakovsky Gallery on Kurfürstendamm until 1990. Due to its four-power status, it was a permissible organization, even though it was classified as anti-constitutional.

In the Federal Republic, offshoots of the DSF were founded, but they were banned in most of the Länder. Since the KPD was also banned there from 17 August 1956, this was not surprising.

With glasnost, the DSF became an organization that was extremely problematic for the SED. New members were particularly interested in the political thaw in Russia. This, however, was blatantly rejected by the GDR party and state leadership. The October 1988 issue of the Soviet magazine Sputnik even triggered a ban on the magazine in the GDR. The magazine’s criticism of Stalin’s pact with Hitler seemed unacceptable to the SED. It was not until November 1989, after the fall of the Berlin Wall, that a special edition was published containing the articles that had been banned since October 88,

The DSF officials were instructed to inform, but to avoid any statement or even discussion about the conditions in the GDR. But not all DSF officials complied.

On 16 November 1989, DSF President Erich Mückenberger resigned, followed by the secretariat on the 29th. For the first time in the history of the DSF, an extraordinary congress was called for January 1990 in Schwerin. But the DSF as a mass organization was dead.  The “Houses of Friendship” used by the society were handed over to the Länder and municipalities, and the number of members fell to 20,000 by November 1991.

In Berlin, Brandenburg, Mecklenburg-Western Pomerania, Saxony, Saxony-Anhalt and Thuringia, the DSF survived as a registered association on a federal basis. On 28 March 1992, the name of the Society for German-Soviet Friendship was changed to “Bridges to the East” – Federation of Societies for International Understanding e. V. This was dissolved on 31 December 1992.

Front view of the Soviet Memorial.

Besides the DSF, numerous organizations were part of the propaganda machine. Especially, of course, the schools and universities in the GDR. German-Russian relations over the centuries were presented in a biased way, in line with socialist historiography.

And certain topics were taboo or simply lied about.

The mass murder of around 4,400 Polish prisoners and the murder of up to 21,000 Polish officers and intellectuals by members of the NKVD at Katyn in April/May 1940 became known in summer 42 when the mass graves were discovered.

But perpetrators who were still alive were not prosecuted. Victims’ relatives sued unsuccessfully in Russia for access to the investigation files, official information about the circumstances of the victims’ deaths, their legal rehabilitation and compensation.

In the GDR, Katyn and the other murders of the NKVD were of course crimes committed by the Nazis and the Western portrayal was a sign of the power of the “neo-fascists” in the Federal Republic.

Although in the West the Soviet perpetration was generally assumed, historians who mentioned this were always in danger of being put in the right-wing corner.  For Holocaust deniers used Soviet Katyn denial as material for their crude theories. In some cases, before 1989, German prosecutors-initiated investigations into Katyn, not because of Soviet denial but because of possible denial of Nazi crimes.

GDR propaganda showed Russia as the eternal victim of German aggression.  Sergei Eisenstein’s monumental film Alexander Nevsky from 1938 still determines the perception of the early period of German-Russian contacts. The fact that Nevsky and the Novgorod Boyars had the same goals as the Teutonic Order in Estonia and Livonia around 1240 is not mentioned. The supposedly powerful Order sent between 50 and 100 knights to the battle of Lake Peipus. The bulk were about 700 Danish and German knights and 1,000 Estonians. They pursued Nevsky’s army across the frozen lake in order to take back from the Rus the spoils of their campaign to Estonia and Livonia. The Novgorod Chronicle of Rus speaks of 400 dead and 50 captured “Nemtsy”, which at that time meant Germans and Danes. The German Livonian Reimchronik mentions 20 dead and 6 captured knight-brothers. Nevsky had by no means saved the land of Rus, rather he had to submit to the Golden Horde at this time, which had destroyed the city states. It was to take over 200 years before the Rus played a role again. It was not until Ivan I that Moscow became a significant power. In 1494, Russian merchants were murdered in Livonia. In reaction, St Peter’s Court in Novgorod was once again plundered, and the Hanseatic merchants imprisoned. But this time the German merchants did not return. Poland and the Scandinavian countries dominated the region until the 17th century….

The Soviet leadership made sure that practically every town in the GDR had a Soviet World War 2 memorial. Often combined with a military cemetery. In Berlin, four were established.  The main one is in Treptower Park, others in Schönholzer Heide in Pankow, in Bucher Schlosspark and in Tiergarten.

The latter memorial was in the British sector of West Berlin. The four-power status allowed the Red Army to post guards of honour there. After the Wall was built in 1961, it was sealed off by the British occupation forces, but the guards remained until 22 December 1990. Then the memorial passed to the state of Berlin. Germany is contractually obliged to maintain the war gravesites. In 2014, the last major renovation took place; a historian consulted on the matter had stated that the colour of the stars on the tanks was white, but the error was only noticed after completion. Russian protests led to the change to the correct red. In contrast, pure monuments have often disappeared, such as the T-34 tank at the Dreilinden border crossing.

Rather few tourists visit the Soviet memorials today. But Treptower Park is a popular recreation area for Berliners. It is located directly on the Spree River, only a few kilometers from the Eastside Gallery and The Wall Museum. Since the four memorials are also cemeteries, their existence is assured. But there are protests against them and, time and again, attacks.  The German-Russian Museum in Karlshorst has a permanent exhibition on the 1941-45 war. It originated from the museum of the Soviet armed forces.

Today, Berlin is probably the German city with the strongest Russian influences.

The Russian House of Science and Culture is now the official cultural representation of the Russian Federation. Located on Französische Straße, it has a concert hall with about 500 seats, a cinema with 200, four exhibition rooms and a music salon. It has around 200,000 visitors a year.

Many Russian artists exhibit in Berlin galleries. In addition, there are numerous Russian shops selling food, not only for the many Russian emigrants. And restaurants with Russian specialities. German-Russian schools and kindergartens offer bilingual education. And not to be overlooked are the Orthodox churches in the city.

Since perestroika and Gorbachev, Russia’s image has become much more positive throughout Germany. But Putin has made the image worse again. Russia’s renewed quest for power is viewed critically by many. A Berlin murder of a Georgian in 2019 is attributed by the media to the Russian secret service. 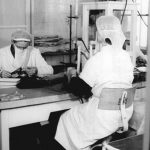 Public health and propaganda in east and westblog
The GDR discovers Prussiablog
We use cookies to ensure that we give you the best experience on our website. If you continue to use this site we will assume that you are happy with it.Ok